What’s it like to get an IUD at carafem? One client’s experience

I recently got an IUD, after being a dedicated pill-popper for over 10 years. And by pill-popper, I mean birth-control-pill-popper.

Why I decided to get an IUD

While the pill has been a great method for me overall, it’s definitely had its bad moments; once when my doctor’s office didn’t renew my prescription in time and I had to wait a month to start a new pack (boooooo). Once when I accidentally took two pills in the same day because I forgot I’d already taken my dose (why pay attention to the day-of-the-week label, am I right?). Then, a couple months ago, I did the same exact thing. There I was: sitting at work with an awful headache, feeling like I was going to hurl at any moment; realizing I’d done it again.

That was the final straw for me. Researching longer-term birth control options, I was thrilled to learn that IUDs are covered under most insurance plans thanks to the Affordable Care Act. Coupled with the real possibility that I could, at some point in the near future, lose my right to affordable birth control and legal abortion, I decided it was time to break up with my birth control.

The IUD wasn’t an option I had considered for myself, a young woman in my 20s, before I started working for carafem. They were one of the many methods of birth control that had been quickly glossed over during my high school health classes — I associated them with older women who had already had children (a popular and wildly incorrect myth I’ve heard repeated many times since). IUDs sounded invasive, painful, expensive, and scary.

As it turns out, IUD popularity is on the rise in the U.S.: their usage among Americans increased 83% between 2006 and 2010. According to the Guttmacher Institute, they’ve also been one of the most popular methods of birth control in Europe and the developing world for decades. In some parts of Europe, they’ve become more widely-used than the three most popular methods of contraception in the US (condoms, birth control pills, and sterilization).

That was all the convincing I needed — I made an appointment the next day to have an IUD inserted at carafem. For me, the choice between Paragard (copper IUD, lasts up to 12 years) and Mirena (hormonal IUD, lasts up to 6 years) was an easy one. Hormones have helped regulate my menstrual cycle and my mood, and the possibility of a lighter period (or no period at all!) really appealed to me. While Paragard is totally hormone-free and super long lasting, it does tend to bring with it heavier, crampier periods – at least in the beginning. I set the date to get a Mirena, took 800mg of ibuprofen an hour before my appointment, and got ready to kiss my pills goodbye. 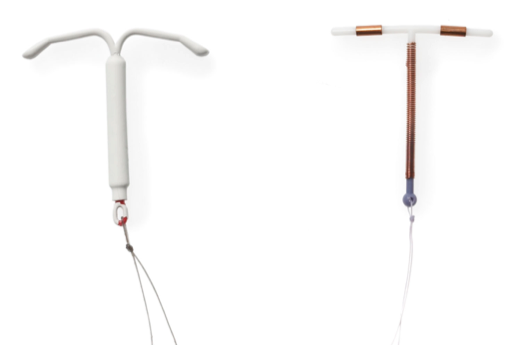 Mirena IUD on the left — Paragard on the right.

What it was like to get an IUD at carafem

I was really nervous about having the IUD inserted. I’d talked to a few friends who had been through it, and while they assured me the payoff was totally worth it, I was also told it “hurt like a mother” going in. I knew I’d be in good hands at carafem, but understood the insertion itself was still not going to be much fun.

From the moment I walked through the door, though, carafem’s health center staff helped put my nerves at ease. I was greeted by a smiling, friendly staff member in a small, clean, modern waiting room. I was called in for my appointment right on time.

After filling out some quick paperwork, I was brought back to what looked like a pretty standard office room – not a cold, uncomfortable exam room – and talked with the lovely and knowledgeable clinician who would perform the insertion.

We discussed my decision to get an IUD, and she asked if I’d decided which type I’d like to get (carafem offers Paragard and Mirena as well as Skyla, a hormonal IUD that lasts up to three years). She talked me through both the benefits and the possible, if rare, risks of each type of IUD. It was helpful for me to learn that certain terms, like “expulsion,” are less scary than they sound – an IUD being expelled might just mean it’s moved position in the uterus and needs to be reset in order to keep protecting against pregnancy. 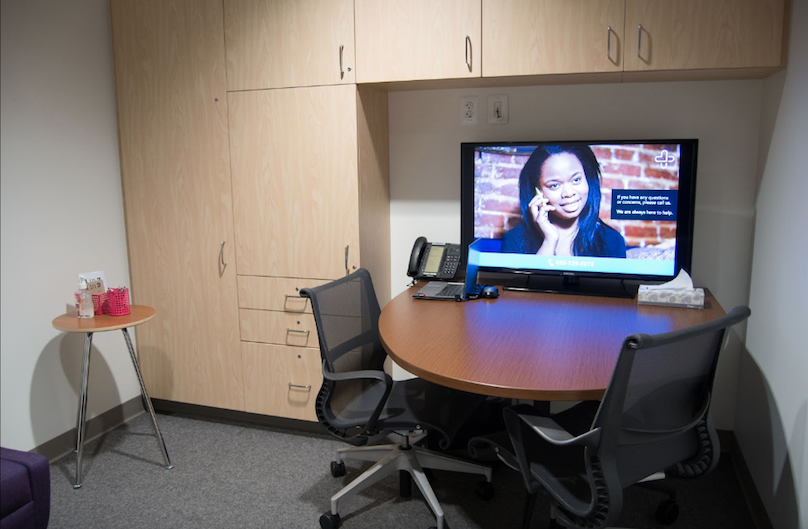 I loved that my clinician took time to make me and my decision feel important. She didn’t rush me or make me feel silly for having concerns, and she answered all my questions honestly. She asked me if I knew what my cervix feels like (I didn’t), and told me it feels like the tip of my nose (it does!). This has made “checking my strings” to ensure the IUD remains properly positioned (a.k.a.: feeling around inside my vagina to make sure the IUD strings don’t feel longer or shorter than normal), much easier.

With my questions answered, it was time to head to the exam room. I was told to undress from the waist down and was given a pink cloth to cover up with. Soft music played over hidden speakers – appropriately, a cover of Gloria Gaynor’s “I Will Survive” – and I noticed the room smelled like lavender. I took a seat on the surprisingly comfortable exam chair, which was later lowered to lie flat like a normal exam table. A couple minutes later, my clinician and a medical assistant came in and we got started. 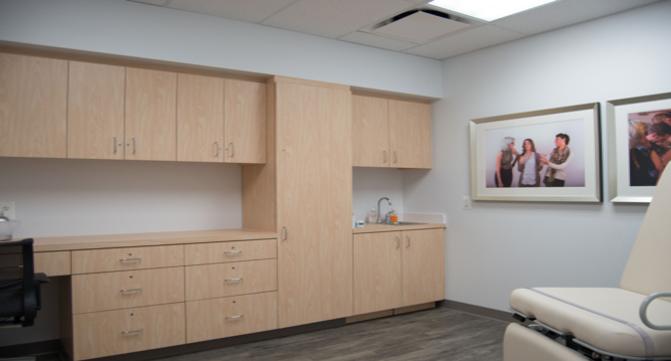 The whole insertion process, from start to finish, took about five minutes. My clinician asked if I wanted to know what she was doing during each step, or if I’d rather not be told — I’m pretty squeamish, so I opted for the latter. We joked and chatted while my clinician used a speculum to gently get a look at my cervix — that part felt like a familiar visit to my OB/GYN’s office. Then I felt some pretty uncomfortable cramping. The assistant kindly offered to hold my hand, and while I appreciated the offer, I didn’t feel the need. Then, my clinician said, “I’m ready to insert the IUD now. You’re going to feel a strong cramp, but try to relax and take deep, slow breaths.” 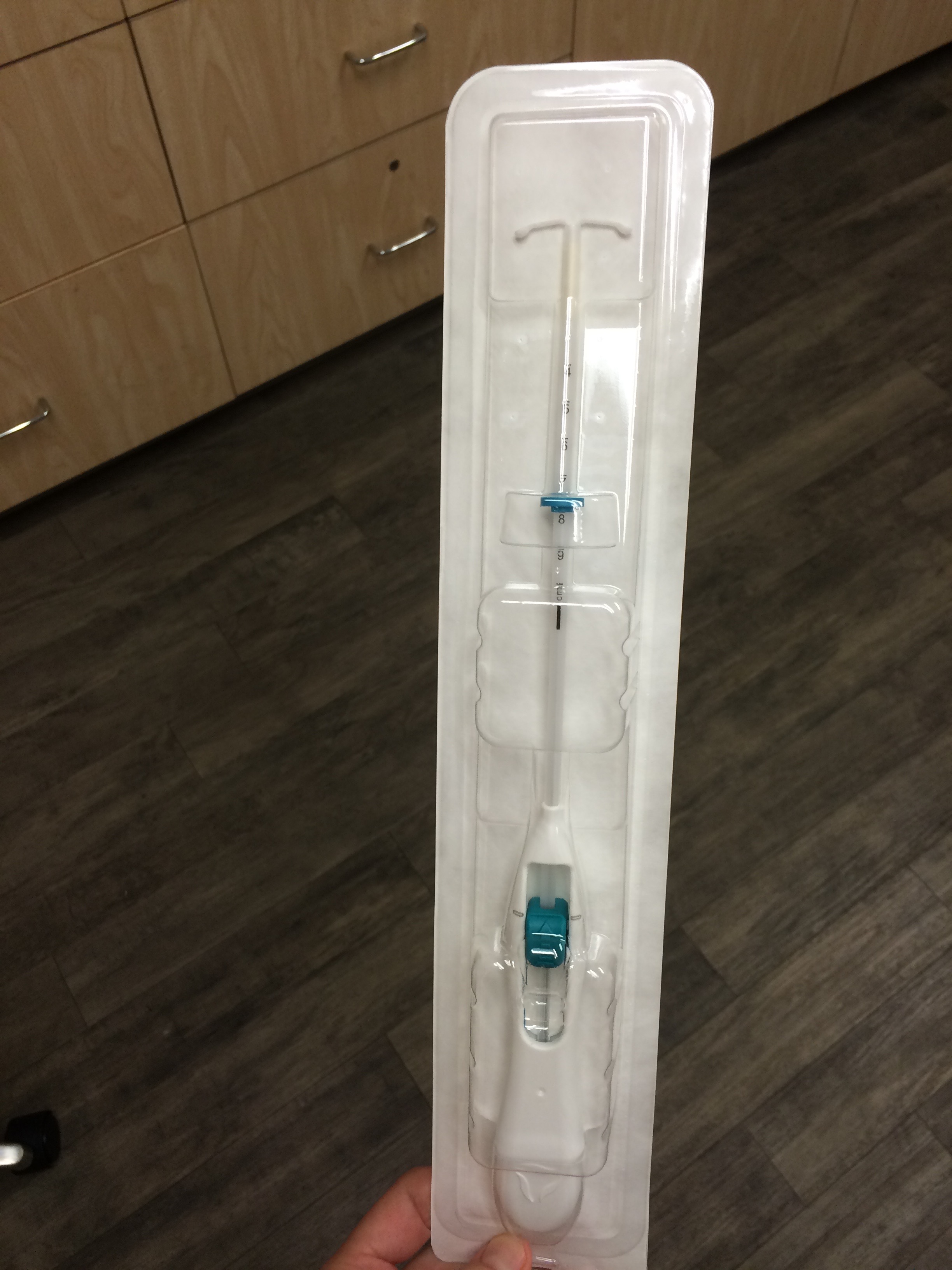 The insertion mechanism in its sterile packaging

I think strong cramp was a bit of an understatement. I dropped an F-bomb, apologized, and then dropped another. My clinician and her assistant assured me I was doing great and was almost done — and then, just a few seconds later, it was over! My clinician said she’d cut the strings a little on the longer side, which makes for an easier removal later — but that she could cut them shorter during my follow-up appointment if they were bothering me or my partner. So far, no complaints!

The speculum was removed and I was congratulated on how well I did — I guess two F-bombs isn’t the worse they’d heard. I got dressed, wishing I’d worn sweatpants or a loose dress instead of jeans. I felt like I had bad menstrual cramps, and heading home into bed sounded really appealing. Instead, I hung out on a comfy couch-chair in the consultation room. My clinician offered me tea, snacks, and a single-use heating pad. After about 15 minutes, I felt well enough to leave. I wrote a comment card about my experience for future clients to read, took a quick satisfaction survey, and bid the staff farewell. 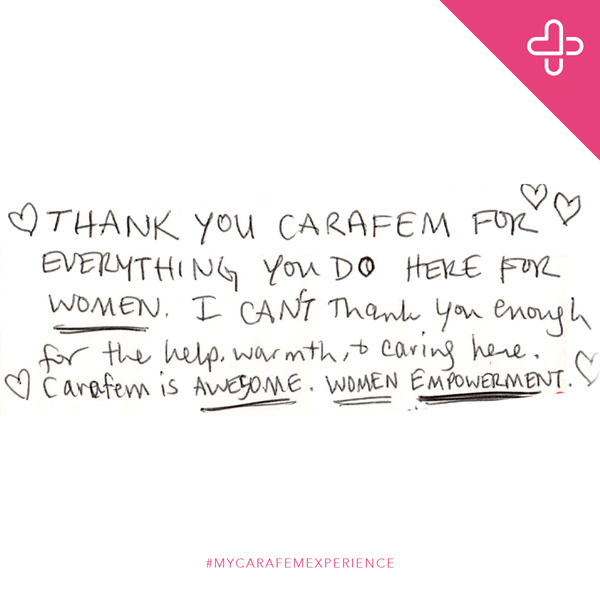 Not my comment, but this pretty much sums up how I felt. Click the card to see more!

The bad cramps lasted about an hour, then subsided into what felt like normal first-day-of-period cramps for the rest of the day. I expected a lot more spotting and cramping after insertion — happy to report I spotted lightly for four days before getting an abbreviated version of my period, which was due to arrive that week. Since then, I’ve been spot and cramp-free.

It’s now been two months since I had my IUD inserted, and I really couldn’t be happier with it. My favorite thing about it is that I forget it’s there. It’s invisible, since the strings are way inside me and don’t hang out like a tampon string; I can’t feel my IUD at all unless I’m looking for the strings, and it hasn’t caused me any side effects or problems. I have peace of mind knowing it’s keeping me super-protected from unwanted pregnancy; that I can have it removed at any point if and when I decide to get pregnant or change birth control methods; and that I don’t have to worry about getting a prescription refilled, picking it up at the pharmacy, and remembering to take a pill every day. 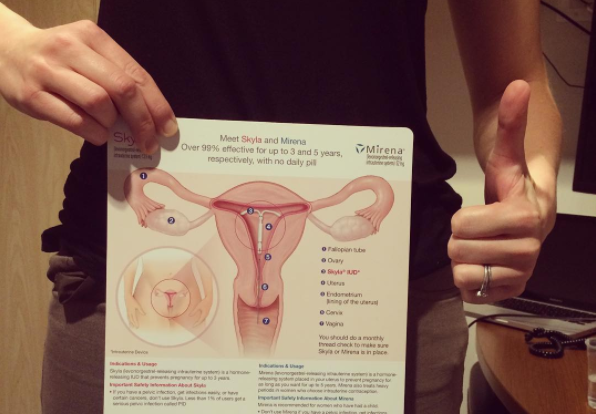 I’m so, so glad I decided to get an IUD. The process was a lot easier and faster than I expected, and the payoff has been so worth it. 6 years of uninterrupted pregnancy prevention, and I don’t have to do a single thing to make it work. I also love that it’s customizable — not big on hormones? Pretty certain you don’t want kids for a really long time? Try Paragard! Oh, and did I mention my IUD was completely FREE with my health insurance? #ThanksObama!

I now advocate for this great invention more than ever and recommend them to all my friends looking for a new, long-lasting and effective form of birth control. I also plug carafem all day, every day — all bias aside, there’s nowhere I’d have rather gone for this experience, and carafem’s client reviews and ratings reflect that others feel the same way.

Thank you, carafem. And long live the wonderful IUD!

Elissa Fischel is carafem’s Social Media and Outreach Coordinator — but she’s also a devoted carafem client and a Big Fan of convenient, modern, respectful healthcare. Since having her IUD inserted, she’s talked about it to anyone who will listen — and wants to share her experience with you, too. This post was originally published in November 2016.

Online appointment booking? Ask and you shall receive.

carafem has been listening to our clients since Day 1. We started by only offering the abortion pill when we… 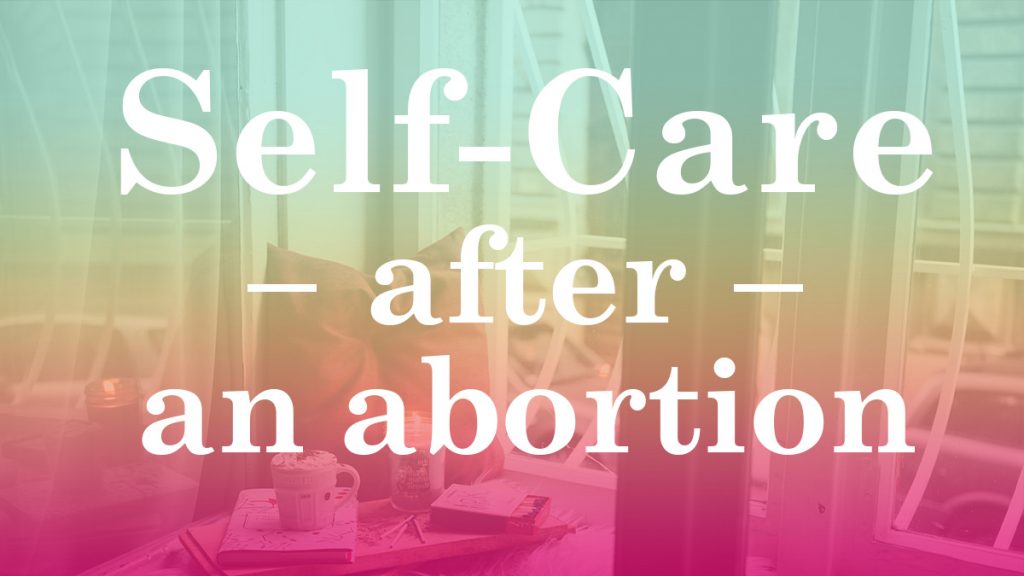 After Abortion Care: Symptoms to Watch for & Recovery Tips

If 2020 has shown us anything, it’s that self-care and care for your COVID squad are super important. That’s probably…