In the ongoing conversation about abortion, indigenous Americans are oftentimes left out. This is a pretty glaring oversight since Native American women are over-represented in abortion statistics.

What does this mean?
It means that the ratio of Native American women compared to other ethnicities in a particular issue does not reflect the true proportion of their population. In the case of reproductive health, specifically, it means that Native American women experience a higher rate of unintended pregnancy than their Caucasian counterparts. These disproportionately high unintended pregnancy rates may lead to more abortions.

Why does this happen?
Poverty, discrimination, and violence all contribute to an environment that does not support Native American women’s ability to fully control their reproductive health. Indigenous American women have experienced (and continue to experience) harsh mistreatment – from forced sterilization to persistently high rates of rape and sexual assault in their communities. They continue to face barriers that are rooted in historical abuse, lack of resources, and contemporary misunderstanding. Since Native American populations were targeted during the eugenics movement, it is understandable that any conversation around reproductive justice for this population is fraught with cultural trauma and suspicion.

How does this all relate to abortion access?
Federal policies have a disproportionate impact on indigenous American women’s ability to access abortion, since abortions are not performed on reservations. Income inequality and poverty make it even harder for many Native American women to get the care they need. Add to that the fact that the Indian Health Service is non-compliant with its own abortion policy in many of its clinics, and the indigenous American community is neglected and left without reproductive healthcare options.  Teenage pregnancy and unintended pregnancy rates continue to increase, signaling that this is an important issue to address.

What do Native Americans say about abortion, though?
“Within traditional societies and languages, there is no word that equals abortion. The word itself is very harsh and impersonal. When speaking to traditional Elders knowledgeable about reproductive health matters, repeatedly they would refer to a woman knowing which herbs and methods to use “to make her period come.” This was seen as a woman taking care of herself and doing what was necessary. Oftentimes women would turn to the women within her society that were the keepers of those herbs, medicines, and techniques for assistance.” (Quote source)

Within their communities, Native Americans are organizing and creating empowering opportunities for themselves. Organizations like Mending the Sacred Hoop (which works to reduce violence against Native American women), the Native American Rights Fund, and The Native American Women’s Health Education Resource Center (NAWHERC) are only three examples of the important strides that indigenous Americans have made to secure, protect, and advance their rights and health. More recently in the news, Native American designers and artists have raised awareness of their heritage by telling their stories through magnificent clothing design, prompting important discussions about advocacy, cultural aesthetics, and storytelling.

So what can we do?
First, we can repeal the Hyde Amendment, and free up federal funds to support indigenous women who are seeking an abortion. Second, we can educate, provide services, and show support for and appreciation of Native American culture without being disrespectful. And lastly, we can educate ourselves by learning more about indigenous women and their lives by reading reports like “Indigenous Women’s Reproductive Rights: The Indian Health Service and Its Inconsistent Application of the Hyde Amendment” (October 2002) and watching documentaries like Young Lakota (2013).

Fresh on the blog! In honor of #Indigenous Peoples Day: http://t.co/1ja14Jrsba pic.twitter.com/GPSOkOdFjU

Did you like this post? Do you think carafem has a great message? If so, sign up for our newsletter and stay up-to-date as we bust abortion stigma and provide top-notch reproductive healthcare services! 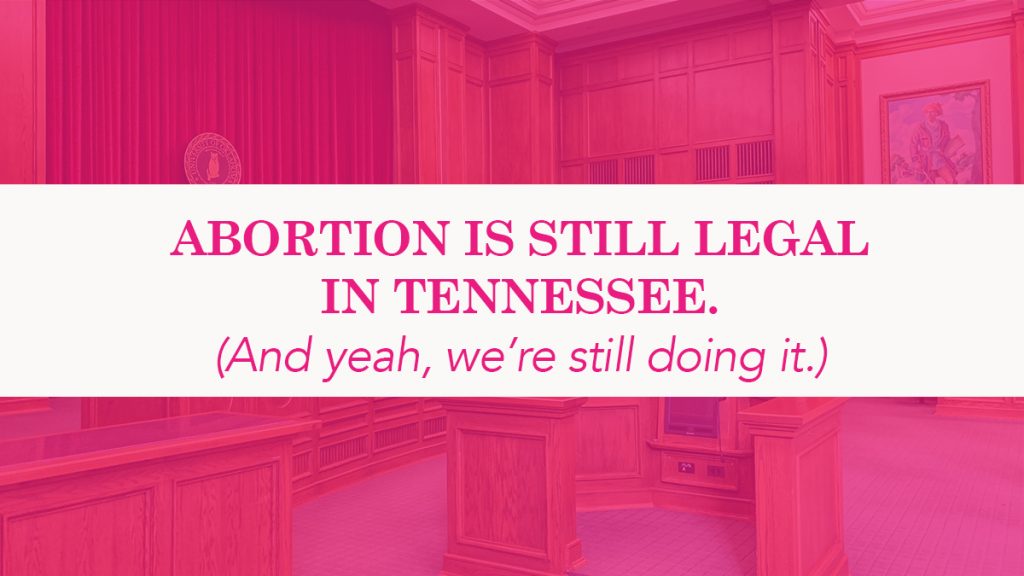 Abortion is Still Legal in Tennessee (And Yeah, We’re Still Doing It)

In a blatant violation of the constitution, the governor of Tennessee just signed a law into effect to ban abortion…

Talking about abortion can be a surprisingly tough challenge. Many people don’t think about it until they’re confronted with an…